Joe Igbokwe, a chieftain of the All Progressives Congress (APC) in Lagos State has claimed that his house in Nnewi in Anambra State, has been razed by the Indigenous People of Biafra (IPOB) insurgents.

Igbokwe claimed the incident occurred on Sunday afternoon, and he said IPOB members (an outlawed group) are behind it. 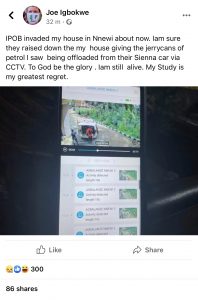 “IPOB invaded my house in Nnewi about now. Iam sure they raised down the my house giving the jerrycans of petrol I saw being offloaded from their Sienna car via CCTV. To God be the glory . Iam still alive. My Study is my greatest regret,” Igbokwe wrote on his known Facebook page.

Igbokwe has been vocal in his criticism of alleged violence and extremism by IPOB, a group led by Nnamdi Kanu.

Earlier this year, he revealed that Kanu asked his men to behead him anywhere he is found.