Senator Dino Melaye, Spokesperson of the Peoples Democratic Party (PDP) Presidential Campaign Management Committee, on Saturday questioned Governor Nyesom Wike of Rivers State’s sincerity with regard to his demand for “justice” from the leadership of the party.

POLITICS NIGERIA recalls that ahead of the 2023 elections, aggrieved Wike on Thursday pledged to furnish the presidential candidate of Labour Party (LP) Peter Obi, with “all logistics supports” needed for his campaign in Rivers State.

Governor Wike disclosed this in Port Harcourt during the commissioning ceremony of a flyover in the state.

Reacting, Melaye pointed out that the presidential candidate and National Chairman of the Labour Party (Julius Abure) are both Southerners. 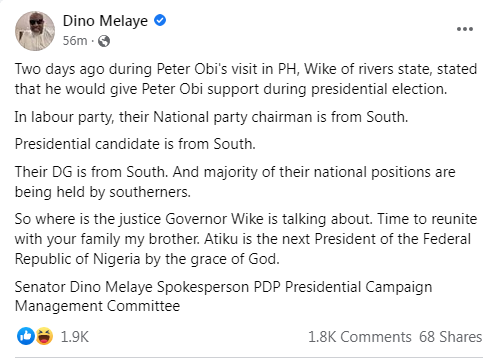 He wrote on his verified Facebook page: “Two days ago during Peter Obi’s visit in PH, Wike of Rivers state, stated that he would give Peter Obi support during presidential election.

“So where is the justice Governor Wike is talking about. Time to reunite with your family my brother.

“Atiku Abubakar is the next President of the Federal Republic of Nigeria by the grace of God.”