Joe Igbokwe, a chieftain of the All Progressives Congress (APC) in Lagos State, on Saturday said Muhammadu Buhari never ‘short-changed’ the Southeast region since 2015 that he assumed office as president.

POLITICS NIGERIA reports that Igbokwe stated that Buhari is “the only President since 1999” that remembered the Southeast. 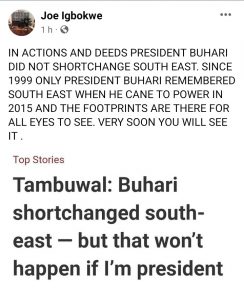 “In actions and deeds, President Muhammadu Buhari did not short-change Southeast. Since 1999, only President Buhari remembered Southeast when he came to power in 2015, and the footprints are there for all eyes to see. Very soon, you will see it,” Igbokwe wrote on his known Facebook page.

Although there is a growing clamour for Southeast presidency, Igbokwe is throwing his weight behind a South-West aspirant, Bola Tinubu.

Several groups and notable individuals have made appeals to the two major political parties, the APC and Peoples Democratic Party (PDP), to zone the presidency to the South East.

Former Governor of Imo State, Rochas Okorocha; Governor of Ebonyi State, Dave Umahi; Peter Obi, a former Governor of Anambra State; and Anyim Pius Anyim, ex-President of the Senate, are some of the several Igbo politicians hoping to succeed President Buhari in 2023.