POLITICS NIGERIA reports that according to Igbokwe, supporters of Tinubu should be watchful. 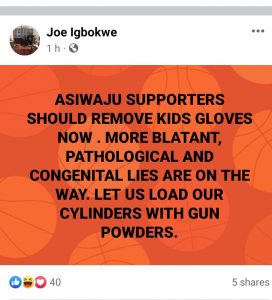 “Asiwaju supporters should remove kids glove now. More blatant, pathological and congenital lies are on the way. Let us load our cylinders with gun powders,” Igbokwe wrote on his known Facebook page.

On January 10, 2022, Tinubu announced his intention to run for the President of Nigeria to President Muhammadu Buhari. This was the formal form of announcement from him.

Since the 69-year-old, a former governor of Lagos state, declared his intention to run for president in 2023, a lot of concerns have been raised about his health.

The “Jagaban”, as he is popularly called by his admirers and supporters, has been in and out of hospital in the United Kingdom (UK). But that has not prevented him from going around the country to consult with leaders at different levels about his presidential ambition.

Many of his supporters — politicians like Kashim Shettima, serving senator, and Abdulmumin Jibrin, former house of representatives member — have argued that Tinubu deserves to be president because he worked hard for President Muhammadu Buhari’s presidential bid in 2015.

The argument is also premised on the clamour for power to orbit to the south in 2023.