Deji Adeyanju, a former youth leader of the Peoples Democratic Party (PDP) says the party does not possess “any serious presidential candidate” from the southern region of Nigeria.

According to Adeyanju via his known Twitter handle on Saturday, all the PDP’s “serious candidates are in the North”. This is as many prominent individuals of Southwest and Southeast extraction are calling for one of their own to be Nigeria’s next President (in 2023). 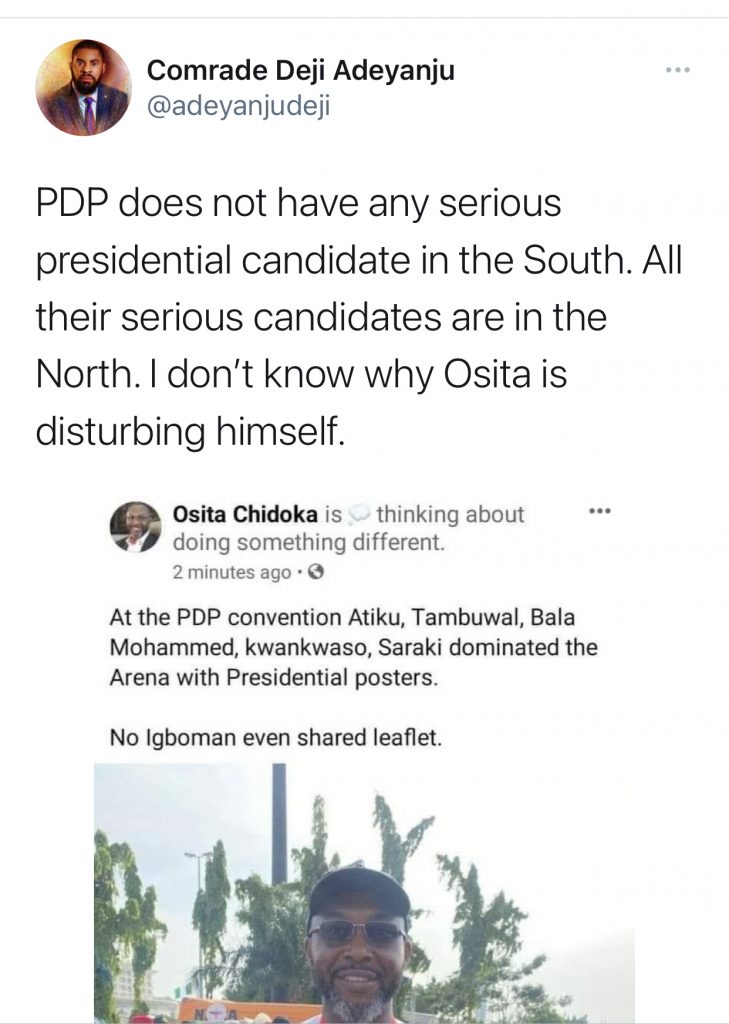 “PDP does not have any serious presidential candidate in the South. All their serious candidates are in the North. I don’t know why Osita is disturbing himself,” Adeyanju wrote.

The Convener of the Concerned Nigerians Group (CNG) was reacting to a Facebook post by Osita Chidoka, a former aviation minister and Federal Road Safety Corps (FRSC) corps marshall who said presidential posters of Atiku Abubakar, Aminu Tambuwal, Bala Mohammed, Rabiu kwankwaso and Bukola Saraki dominated the PDP Convention Arena at the Eagle Square, Abuja. Chidoka had pointed out that “no Igboman even shared leaflet”.

POLITICS NIGERIA reports that after a failed attempt by the suspended National Chairman of the PDP Uche Secondus, to stop the national convention of the party, 3,600 delegates converged in Abuja today (Saturday). They will be at the Eagle Square tomorrow (31 October) as well, to elect new leaders for the country’s leading opposition.

The convention was initially enveloped in uncertainty until the Court of Appeal, Port Harcourt Division, on Friday, dismissed the suit filed by Secondus challenging his suspension and seeking to stop the event.

About 21 positions in the National Working Committee (NWC) of the party will be contested for by at least 27 candidates at the convention.

General elections will be held in Nigeria on 18 February 2023 to elect the President, Vice President, House of Representatives, and Senate.