A chieftain of All Progressives Congress (APC) in Lagos State, Joe Igbokwe, has asked people to “perish the thought” that a Northerner will succeed President Muhammadu Buhari in 2023.

POLITICS NIGERIA reports that Igbokwe, a staunch supporter of Bola Tinubu, the National Leader of the APC, said the clamour for Northern presidency is “a joke”. 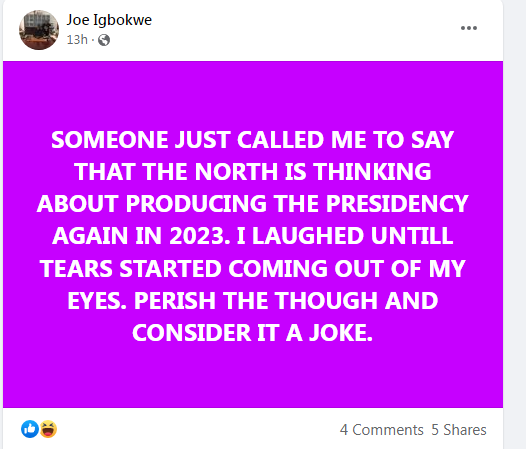 “Someone just called me to say that the North is thinking about producing the presidency again in 2023. I laughed until tears started coming out of my eyes. Perish the thought and consider it a joke,” Igbokwe wrote on his known Facebook page.

This news medium understands that the APC is yet to zone its presidential ticket.

The APC hierarchy had side-stepped clamour to zone its presidential ticket to the North on the ground that President Buhari is from the North and its National Chairman, Abdullahi Adamu, is also from the North.

However, some members of the party are now pushing for party to throw the ticket open to all the six geo-political zones of Nigeria, a move which seems to be gaining a lot of support.

About 23 presidential aspirants are left in the race for the APC ticket.