POLITICS NIGERIA reports that a faction of the Labour Party led by its former Deputy National Chairman, Callistus Okafor, on Wednesday elected Digar Ezenwafor as its presidential candidate for the 2023 general elections.

Ezenwafor worked with a factional presidential candidate of the party, Obi, as his Chief of Protocol during his first term as governor of Anambra State.

Reacting to the development, Nwoba said it is a “ploy to give reason as to why Obi will no longer be contesting office of the president on the platform of the Labour Party”. 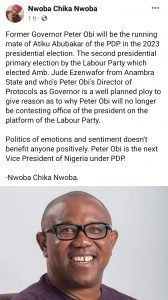 “Former Governor Peter Obi will be the running mate of Atiku Abubakar of the PDP in the 2023 presidential election,” Nwoba declared in a Facebook post.

“The second presidential primary election by the Labour Party which elected Amb. Jude Ezenwafor from Anambra State and who’s Peter Obi’s Director of Protocols as Governor is a well planned ploy to give reason as to why Peter Obi will no longer be contesting office of the president on the platform of the Labour Party.

“Politics of emotions and sentiment doesn’t benefit anyone positively. Peter Obi is the next Vice President of Nigeria under PDP.”