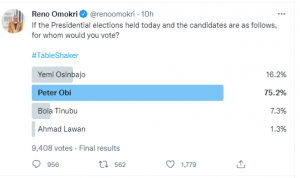 It is not the first Obi would win an online poll conducted by diaspora-based Omokri. About 11 months ago, Obi won a 2023 presidential election in an online survey administered by the former presidential aide.

Obi was the Vice Presidential Candidate of the Peoples Democratic Party (PDP) in the 2019 election, and has a cult following online.