As the 2023 general election approaches, the presidential candidate of the Labour Party (LP), Peter Obi, has said he visited Governor Nyesom Wike of Rivers State ‘to discuss crucial national issues’.

Then, he was considered as a viable running mate to Atiku alongside two others.

However, he lost the chance to Delta State Governor, Ifeanyi Okowa. 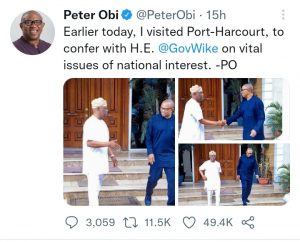 The emergence of Obi, a former governor of Anambra State, is creating waves among youth across the country. The 60-year-old has been a sensation on social media. But political analysts say time will tell if his supportership on social media will translate to victory at next year’s poll.