As the 2023 election approaches, a chieftain of the ruling All Progressives Congress (APC) in Lagos State, Joe Igbokwe, on Wednesday said Atiku Abubakar, presidential candidate of the Peoples Democratic Party (PDP), “is not supposed to be in the race”.

POLITICS NIGERIA reports that according to Igbokwe, who is the Special Adviser for Drainage and Water Resources to Governor Babajide Sanwo-Olu, “a special arrangement” was made for the presidency of Nigeria to be zoned to the Southern region of the country in as far back as 1993. 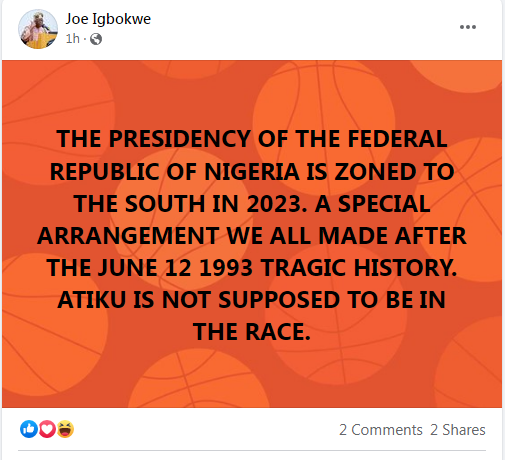 “The Presidency of the federal republic of Nigeria is zoned to the south in 2023. A special arrangement we all made after the June 12 1993 tragic history.

“Atiku is not supposed to be in the race,” Igbokwe wrote on his known Facebook page.

Igbokwe is a top campaigner of Bola Ahmed Tinubu, a colossal political figure and presidential flag-bearer of the APC whom Igbokwe often describes as his benefactor.