Deji Adeyanju, a former Youth Leader of the Peoples Democratic Party (PDP), on Saturday claimed that a presidential aspirant in the 2023 election, Atiku Abubakar, has decided to pick his running mate from the South-South region.

POLITICS NIGERIA reports that earlier, Adeyanju had counseled another presidential aspirant, Peter Obi, to exit the PDP and pursue his ambition on another platform, as with the main opposition party, he will ‘lose’ on every front.

Obi, a southeasterner, was Atiku’s running-mate in the 2019 presidential election. 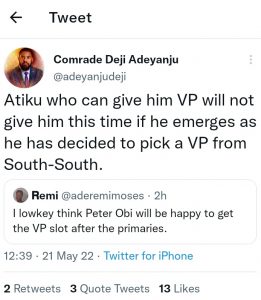 “Atiku who can give him (Peter Obi) VP will not give him this time if he emerges as he has decided to pick a VP from South-South,” Adeyanju wrote on his known Twitter handle.

“The time for Peter Obi to leave PDP and join another party is now,” Adeyanju said in another tweet.