As the 2023 election approaches, Senator Orji Uzor Kalu, the Chief Whip of the ninth Senate, on Friday said his party, the All Progressives Congress (APC), should not underestimate the recent high-profile defections to the New Nigeria People’s Party (NNPP), POLITICS NIGERIA reports.

On Wednesday, three APC lawmakers in the Kano State House of Assembly defected to the NNPP.

According to Kalu, some aggrieved APC members “who have a working conscience” might support a former governor of Kano State, Musa Kwankwaso, in his bid to become the next President of Nigeria if the ruling party and the main opposition party, the Peoples Democratic Party (PDP), field their presidential candidates from any other zone aside South East or North East.

Recall that Kalu had on Monday announced his withdrawal from the 2023 presidential race.

In a statement, the former Abia State Governor said his decision was informed by the fact that the APC will not be zoning the presidency to any region.

According to him, if a candidate of southeast extraction doesn’t get the APC ticket, he will support a candidate from the Northeast.

This morning (Friday), Kalu reiterated his earlier position that the presidency should go to the North-East if it can’t be conceded to the South-East – for equity. 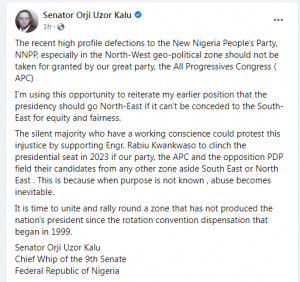 “The recent high profile defections to the New Nigeria People’s Party, NNPP, especially in the North-West geo-political zone should not be taken for granted by our great party, the All Progressives Congress (APC),” Kalu said via Facebook.

“I’m using this opportunity to reiterate my earlier position that the presidency should go North-East if it can’t be conceded to the South-East for equity and fairness.

“The silent majority who have a working conscience could protest this injustice by supporting Engr. Rabiu Kwankwaso to clinch the presidential seat in 2023 if our party, the APC and the opposition PDP field their candidates from any other zone aside South East or North East. This is because when purpose is not known, abuse becomes inevitable.

“It is time to unite and rally round a zone that has not produced the nation’s president since the rotation convention dispensation that began in 1999.”