POLITICS NIGERIA reports that Adeyanju said Sowore is a better option “because he is running with his whole heart and not to negotiate or cut a deal”.

Adeyanju also posited that he does not believe Kwankwaso is a serious presidential candidate.

Furthermore, he restated his support for Igbo presidency. 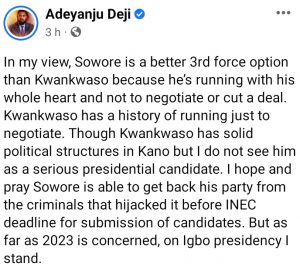 “In my view, Sowore is a better 3rd force option than Kwankwaso because he’s running with his whole heart and not to negotiate or cut a deal. Kwankwaso has a history of running just to negotiate.

“Though Kwankwaso has solid political structures in Kano but I do not see him as a serious presidential candidate. I hope and pray Sowore is able to get back his party from the criminals that hijacked it before INEC deadline for submission of candidates.

“But as far as 2023 is concerned, on Igbo presidency I stand,” Adeyanju wrote on his verified Facebook page.