A prominent commentator on Nigerian affairs, Aisha Yesufu, on Monday taunted a former governor of Borno State, Kashim Shettima, questioning the All Progressives Congress (APC) Vice-Presidential candidate on why he failed to disclose what he knew about the Boko Haram insurgency.

POLITICS NIGERIA recalls that in 2014, Shettima said he is under pressure not to speak the truth. The then-governor while confirming that dozens of the girls abducted from their school in Chibok, Borno state, have been identified in a video released in May that year by Boko Haram, said there is little a governor can do.

Shettima had said: “Leadership calls for restraint. Believe me, if I should speak, heads will roll.”

Earlier in the same year, Shettima had said Boko Haram insurgents are stronger than the Nigerian Army, a statement which infuriated the then–president, Goodluck Jonathan.

A Twitter user, apparently a supporter of the ruling APC administration, on Monday said Shettima has “always spoken the truth” about the insurgency challenge, adding that “now, he wants to be Vice-President, he will have the chance to curb these matters himself”. 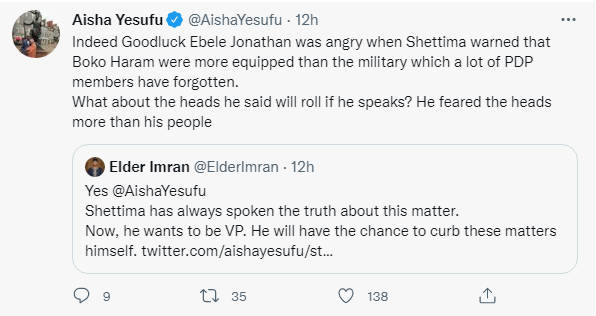 Yesufu has this response: “Indeed Goodluck Ebele Jonathan was angry when Shettima warned that Boko Haram were more equipped than the military which a lot of Peoples Democratic Party (PDP) members have forgotten.

“What about the heads he (Shettima) said will roll if he speaks? He feared the heads more than his people (in Borno State).”