Minister, Niger Delta Affairs Ministry, Senator Godswill Akpabio, has urged the Koroma Tai Community to be dedicated in the protection and maintenance of the Youth Corps Members’ Lodge and Viewing Centre located in their community as government compliments the effort.

He made this appeal during the commissioning/handing over of the corps’ members’ Lodge and Viewing Centre constructed by the Ministry in the Koroma Tai Community recently in Tai Local government Area of Rivers State.

Akpabio, who was represented by Ephraim Brigid, a Management Staff in Housing and Urban Development Department of the Ministry, described the Youth Corps members’ Lodge and Viewing Centre as one of the gains and achievements recorded under the ‘change agenda’ of President Muhammadu Buhari.

He disclosed that the Niger Delta Region should expect more intervention projects as soon as the 2022 appropriation bill is passed. According to him “this commissioning is only the beginning, the Ministry is passionately seeking better and faster ways of delivering on its Mandate. We have noted and learnt many lessons from the development of this project and will factor this into future projects.

Earlier, the Permanent Secretary, Dr. Babayo Ardo, in his welcome address stated that the facilities are among the many projects being developed by the Ministry in each of the nine Niger Delta States. Ardo stated that history is made, “as this is the first Youth Corps’ members’ Lodge to be commissioned by the Ministry in Rivers State. It is, therefore, one of the concrete examples of the commitment and legacy of this administration.”

The Local Government Chairman, Sir Friday Mbakpone, stated that corps members play important roles in the community, school and offices and commended the Ministry for providing comfort to the youth. He pledged the readiness of his office to collaborate with any organisation (public and private) that wants to provide some level of comfort for corps members.

In a related development, the Minister, while Commissioning the Community Primary School, Tombia in Yenagoa, Bayelsa State, stated that modern economy is Knowledge driven and the Niger Delta Region needed to be carried along, referring to findings in UNESCO Global Education Monitoring Report which stated that poverty is directly connected to poor quality education and improvement in the quality of education can reduce poverty to as much as 30 percent.

Akpabio noted that the transformation of the Niger Delta Region cannot be achieved by just the Federal Government or any individual institution or Agency but through effective collaboration with stakeholders. The Minister then expressed optimism that the completed structures would improve the peoples’ quality of life in Niger Delta Region. 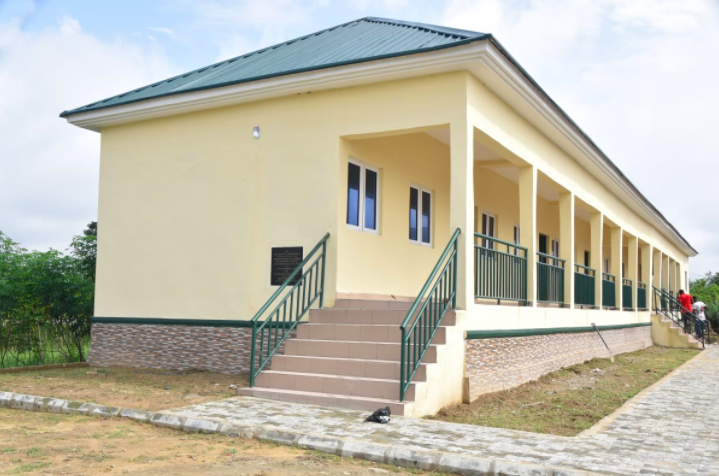