Veteran Nollywood actor, Patrick Doyle, on Monday raised an alarm about a possible terrorist attack “against a prominent hotel in Lagos”.

POLITICS NIGERIA reports that Doyle said this via his known Facebook page and called for “intercessory prayers”. 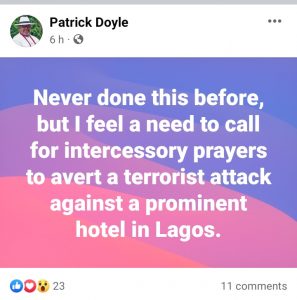 “Never done this before, but I feel a need to call for intercessory prayers to avert a terrorist attack against a prominent hotel in Lagos,” Doyle wrote.

POLITICS NIGERIA reports that conflict remains the primary driver of terrorism, with over 96 per cent of deaths from terrorism in recent years occurring in countries already in conflict. The ten countries with the highest impact of terrorism (Nigeria inclusive) are all engaged in at least one armed conflict.

Despite the overall fall in the impact of terrorism across the world, it remains a significant and serious problem in many countries.

As the threat of terrorism continues to change, experts advise policymakers to be aware of novel approaches to counter-terrorism.