Nigeria’s former minister of finance, Ngozi Okonjo-Iweala, is a step close to leading the intergovernmental organisation that is concerned with the regulation of international trade between nations but before her is a stumbling block – the United States.

The United States government has thrown its weight behind Korean Trade Minister, Yoo Myung-hee, Mrs Okonjo-Iweala’s opponent, for the position of the World Trade Organisation’s Director-General. The American government said it prefers Mrs Myung-hee because she is a bona fide trade expert who has distinguished herself during a 25-year career as a successful trade negotiator and trade policy maker.

The objection of the United States authorities against Mrs Okonjo-Iweala’s selection became obvious after 104 members – countries recommended her for the top job. Less than 24 hours after the endorsement, the Office of the US trade representative released a statement of support for the former minister’s opponent.

Ideally, the organisation chooses its director general by consensus, with all 164 members having to approve a candidate. Mrs Okonjo-Iweala is reportedly being backed by countries in Africa, the Caribbean, the European Union, China, Japan and Australia.

The Ministry of Foreign Affairs said in its statement that, “Dr. Ngozi Okonjo-Iweala has secured the support of the majority of the member countries, but is yet to be declared and returned the winner. This is because apart from winning the election, all 164 Member States of WTO were expected to adopt the winner by consensus. In accordance with the role of the procedure of the WTO.”

Analysts have posited that there is more to what meets the eyes regarding the hiccups from the US government, placing emphasis on the lingering US-China diplomatic feud. While the Nigerian government has promised to canvas votes for its own, POLITICS NIGERIA x-rays the chances of Mrs Okonjo-Iweala in being the first African and female to occupy the international office.

The Federal Government on Friday announced that it was currently reaching out to the United States and other members of the World Trade Organisation to clear all bottlenecks to the emergence of Dr. Ngozi Okonjo-Iweala, as Director-General of the WTO.

Minister of State for Industry, Trade and Investment, who doubles as the Chairperson of the Campaign Strategy Team for Okonjo-Iweala, Mariam Katagum, disclosed this at an emergency virtual meeting that she convened on Friday.

Not the first time…

The events of last week are similar to what the former finance minister experienced in 2012. After the completion of her tenure as the Managing Director of the World Bank Group, the 66-year-old showed interest in the Presidency of the international bank.

She was a candidate for President of the World Bank, running against Dartmouth College President Jim Yong Kim; if elected, she would have become the organisation’s first female president. It should be noted that the then US President Barack Obama nominated Mr Kim at the eleventh hour. The Korean-born academic emerged the winner afterwards.

The reason for Okonjo-Iweala’s failed bid to lead the World Bank is the racial discriminiation that continues to erode the legitimacy and credibility of the Breton Woods institution, says Professor Joseph Kieyah‬, a Senior Policy Analyst and Head of Private Sector Development Division at the Kenya Institute for Public Policy Research and Analysis (KIPPRA).

Also, while serving under former President Olusegun Obasanjo, Mrs Okonjo-Iweala reportedly lost her bid for the UN Deputy Secretary General position in 2007. This was reported by Sahara Reporters. This was at a time Asha-Rose Mtengeti Migiro, a Tanzanian politician and diplomat, was elected the Deputy Secretary-General of the United Nations

While she might have lost the bid for the World Bank and United Nations top positions, it is a different ball game with the WTO.

The WTO General Council Chair David Walker has reported the results of the consultations to appoint the next DG. After the meeting WTO spokesperson Keith Rockwell summed up the announcement by GC Chair Walker: “The candidate that had the best chance of attaining a consensus of the membership is Dr. Ngozi Okonjo-Iweala of Nigeria. Consultations on the way forward will start immediately”, he said.

US opposition does not mean the Nigerian cannot be appointed, but Washington could nevertheless wield considerable influence over the final decision, Mr Rockwell told BBC. He noted that there was likely to be “frenzied activity” to secure a consensus for Ms Okonjo-Iweala’s appointment. She has the support of the European Union.

As it stands, consultations must continue on the way forward to accommodate members that are opposed in order to ensure full consensus. Meanwhile, POLITICS NIGERIA learnt that before the voting on November 9, any ambiguity in Paragraph 20 of the WTO procedures regarding the voting guidelines will be addressed.

There is also a likelihood that the WTO will resort to the Marrakesh Agreement of January 1995, the agreement arrived at in Morocco by 123 nations to establish the WTO.

According to the agreement, breaking stalemates are resolved with the winner emerging by obtaining a simple two-thirds majority of the votes by all member-countries and confirmed with a good geographical spread.

If this will come to play, the US cannot upturn the decision of 160 countries and the European Union. This implies that Mrs Okonjo-Iweala will coast to victory on November 9. 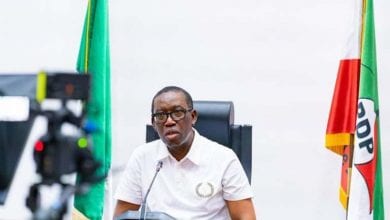