Dozens of members of the All Progressives Congress (APC) in Osun State under the aegis of The Osun Progressives (TOP) on Tuesday staged a peaceful protest against the state party Chairman, Gboyega Famoodun.

POLITICS NIGERIA reports that the demonstrators demanded the removal from office of Famoodun following the defeat of the party to the Peoples Democratic Party (PDP) in last month’s gubernatorial election.

The protesters, led by one Oluwaseun Abosede, chanting “restructuring,” took off from Odiolowo Area and marched through Olaiya Junction to Ogo-Oluwa Area within Osogbo metropolis, before heading to the state House of Assembly, where they were received by the Speaker, Timothy Owoeye.

Armed with placards and banners with different inscriptions such as “Restructure APC now,” “APC lost Osun because of Famoodun and Oyetola,” “Osun APC needs restructuring,” among others, they were denied entry into the party secretariat by armed security agents. 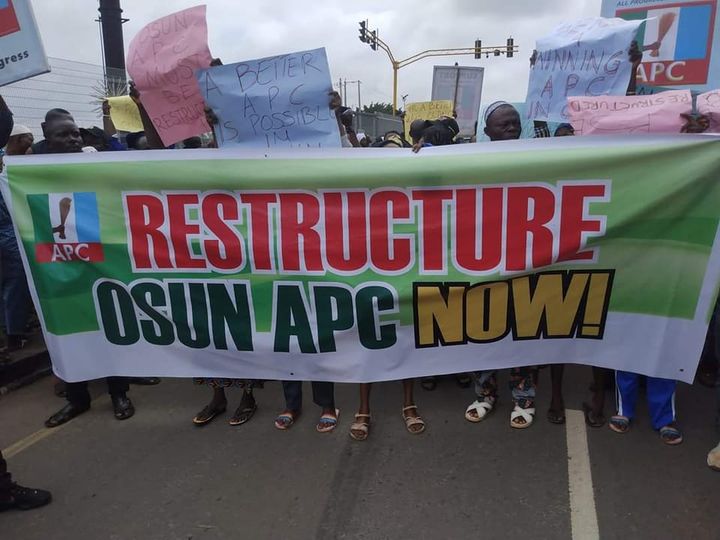 Meanwhile, the Osun State chapter of the APC has condemned the protest.

According to Famodun, in a statement issued by his Media Adviser, Kola Olabisi, the protest was selfish and misplaced.