POLITICS NIGERIA reports that according to Nwoba, “criminals are using the opportunity to do black business and make bad money”.

He advised state governments to deforest some parts of the region. 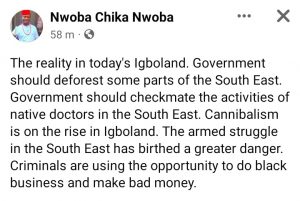 He added: “My brother in-law returning for my wife’s bride price completion the other day was kidnapped in Abia and held hostage for 72 hours. He was later released and his statement doesn’t give joy at all. What about the military man and wife that were killed the other day? Ezinifite in Anambra is currently a den of horror. Okija, Lilu and other places in Anambra are a hotbed of horror.”