Barrister Ifeanyi Ejiofor, a lawyer and human rights activist, has criticised Festus Keyamo (SAN), the Minister of State for Labour and Employment, over his statement that the Federal Government cannot borrow N1.2 trillion to settle overheads, which the Academic Staff Union of Universities (ASUU’s) demands are related to.

POLITICS NIGERIA reports that ASUU has been on strike since February 14 over the federal government’s failure to implement their demands on salaries and allowances of lecturers, and improved funding for universities.

Responding to a question on the “manner” the FG has handled the strike issue on Channels TV’s Politics Today on Friday evening, Keyamo said the Muhammadu Buhari administration doesn’t have the funds to implement the union’s request.

“You cannot allow one sector of the economy to hold your jugular and blackmail you to go and borrow N1.2 trillion for overheads, when our total income is about N6.1 trillion, and you have roads, health centres to build, and other sectors to take care of,” Keyamo had said. 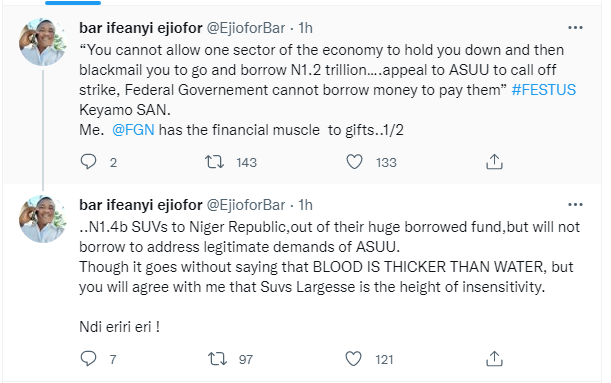 Those words did not sit well with Ejiofor, who lashed out at the FG for having the financial might to gift N1,145,000,000 for the purchase of vehicles to Niger Republic but can’t spend to resolve the ASUU strike.

“@FGN has the financial muscle to gifts N1.4b SUVs to Niger Republic, out of their huge borrowed fund, but will not borrow to address legitimate demands of ASUU,” Ejiofor wrote on his known Twitter handle on Saturday.

“Though it goes without saying that BLOOD IS THICKER THAN WATER, but you will agree with me that Suvs Largesse is the height of insensitivity. Ndi eriri eri!”