The self-acclaimed leader of the Biafra National Guard (BNG), ‘General’ Innocent Orji has said that the group has not started its recruitment because it “cannot admit or deal with people yet”.

POLITICS NIGERIA reports that Orji, via a post on his known Facebook page on Tuesday said the present component of his group are “regular soldiers that have served in different countries”.

He also commented on why the BNG is reluctant to work with “civilian security groups” like the banned Indigenous People of Biafra (IPOB’s) Eastern Security Network (ESN), and the Biafra Nations League (BNL), describing the BNG as “a military institution”. 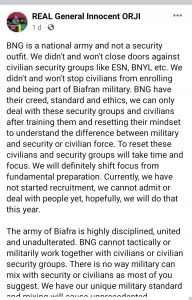 BNG is a national army and not a security outfit. We didn’t and won’t close doors against civilian security groups like ESN, BNYL etc. We didn’t and won’t stop civilians from enrolling and being part of Biafran military. BNG have their creed, standard and ethics, we can only deal with these security groups and civilians after training them and resetting their mindset to understand the difference between military and security or civilian force. To reset these civilians and security groups will take time and focus. We will definitely shift focus from fundamental preparation. Currently, we have not started recruitment, we cannot admit or deal with people yet, hopefully, we will do that this year.

The army of Biafra is highly disciplined, united and unadulterated. BNG cannot tactically or militarily work together with civilians or civilian security groups. There is no way military can mix with security or civilians as most of you suggest. We have our unique military standard and mixing will cause unprecedented catastrophe. They can only help us with intelligence gathering and not tactical or military involvement. Listen, the error of one untrained or badly trained person can cause the death of a battalion. We BNG are disciplined and grounded, we cannot do what most of you desire because military is a different world from yours. We have had situations financiers want control of BNG as basis for financing. But, we immediately shunned them, because we have learned enough how corruption often kicks in. We can and have the capacity to get the job done, it will only consume time.

I have fought wars as a gallant ECOWAS/ECOMOG soldier in about three different African countries. I have been an infantry soldier since 1980s, this is my usual terrain and my men are highly professional. This army knows how to survive. This army knows how to endure and make everything out of nothing. We might be slow or have shunned public donations, we are not crazy, BNG have more of regular soldiers that have served in different countries. We are not a group of overzealous youths shouting we want Biafra and brandishing arms or raiding places. We know what needs to be done for Biafra to be restored. We know what shouldn’t be done to avoid enemy infiltration. All Biafran groups might be open for donations but BNG consider it a grave risk to our mission. Financiers will locate us when led by the spirit, we are not desperate about locating financiers. There is no amount of money that is enough for warfare because it is a reinforcement or replenishment business. A bullet shot needs to be replaced, so, no amount of money can be enough. This is why financing or financiers is an insatiable demand. We have injected millions that if we quote, you will shiver.

It’s good we are communicating today, social media is not a place to say it all. I would have said more but let’s leave it here. BNG is a military institution and military is always united. We cannot join with or do as you think because what should we be doing? Should BNG join or unite with Mr A and Mr B and start doing meeting meeting or monthly dues and drink beer with them. Military is accepting to die, and we always allow people to make up their minds and come. Civilian military relationship is there, we made provisions for it, but, it’s not something achieved by demanding BNG to work with civilian groups or security groups. In BNG we have our standard and nothing can make us go below. We are strictly military and can only deal with military not security or civilian forces. We train security and civilian forces to become soldiers before dealing with them. No margin for error.

Finally, BNG appreciate the works of ESN who are chasing Fulani herdsmen and their cow, keeping our bushes safe for our women to farm. We appreciate those in the coast, stopping vessels. We appreciate those raiding checkpoints and urge them to always put lives of Biafrans first. I appreciate IPOB, MASSOB, IPOBAutopilot and IPOB-DOS, BNYL, All civilian groups and their security groups. The national army of Biafra appreciate any effort made towards restoring Biafra.