Ace broadcaster and owner of Agidigbo FM, Oriyomi Hamzat, has been released by the Nigeria Police Force (NPF), POLITICS NIGERIA can authoritatively report.

Hamzat was released on bail to his lawyers early this morning (Friday).

Recall that this newspaper had reported that Hamzat, who had consistently advocated for justice in a murder case involving Hilton Hotel, Ile-Ife owner, Chief Rahman Adedoyin, was arrested on Thursday morning.

The police claimed that the Ibadan-based broadcaster ignored their invitation severally, stating that he is under investigation.

Agidigbo 88.7FM and Hamzat’s supporters had complained that the media entrepreneur was whisked to Abuja by officers of the Force Intelligence Bureau (FIB) over his call for justice on the murder of a student of Obafemi Awolowo University (OAU), Ile-Ife, Timothy Adegoke.

His arrest had elicited the #FreeOriyomiHamzat hashtag on social media. 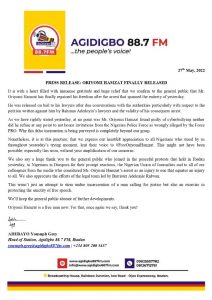