The Ondo State Security Network Agency, codenamed “Amotekun Corps” has confirmed the arrest of some suspects in connection with the Owo Catholic church massacre, recovering some weapons and a vehicle, POLITICS NIGERIA reports. 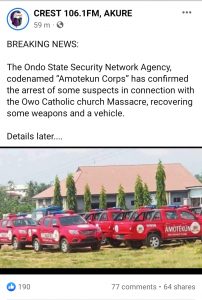 At least, 40 people died in the June 5 terrorist attack in the ancient city. Such was rarely recorded in the southwest region and it left many Nigerians shocked.

The Ondo State Governor, Rotimi Akeredolu, meanwhile expressed his disagreement with the Federal Government, saying it is too early to blame the terror attack on ISWAP.