Early on Saturday, news of Atiku meeting with Tinubu at an airport in Abuja made headlines. However, on Saturday afternoon, in a statement via its official twitter account, the ruling party set the record straight.

“A tweet by one Reno Omokri [@renoomokri], posted on Twitter at 6:24am on May 29th, 2021, with a video captioned: “Tinubu Receives @atiku At Airport As Former VP Returns to Nigeria” has been brought to our attention.”

“This is to inform the general public that the information contained in the above-referenced tweet is fake, erroneous, and mischievously contrived by the fake news advocate to mislead Nigerians, chase clout and gain undeserved recognition.”

“His Excellency, former Governor of Lagos State and the National Leader of the All Progressives Congress (APC), Asiwaju Bola Ahmed Tinubu [@AsiwajuTinubu], and former Vice President of Nigeria, Atiku Abubakar [@atiku] met last night, May 28th, 2021 at the airport by chance!”

“Both statesmen arrived at the airport at about the same time and exchanged courtesies before continuing on their separate journeys. The brief ‘meeting’ was not pre-planned neither was Asiwaju Tinubu part of any entourage to welcome the former Vice President back to Nigeria.”
“We appeal to Nigerians to disregard and discountenance the petty, baloney, and clout-chasing tweet manufactured by the dubious character named Reno Omokri a.k.a Wendell Smith Thank you.” 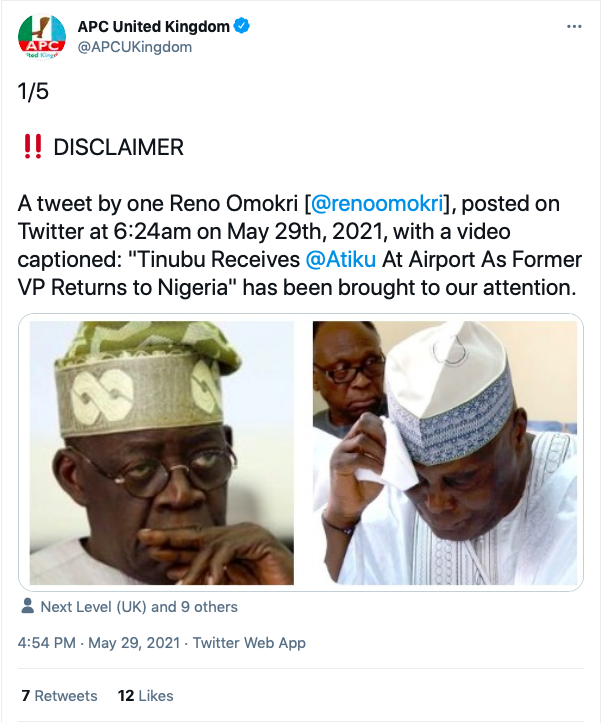