POLITICS NIGERIA learned that the attack occurred late on Tuesday night through to the early hours of Wednesday.

The bandits reportedly kidnapped a former Councilor, Hon. Zubairu Abubakar Billy; and Hon. Mohammed Mainasara Dan Dodo, both of whom are prominent individuals in the area. 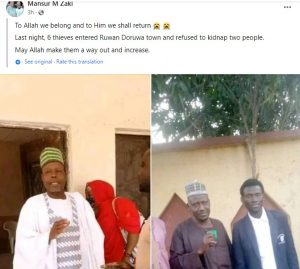 Meanwhile, Suleiman Abubakar Gumi, member representing Gummi/Bukkuyum Federal Constituency of Zamfara State, on Tuesday said terrorists had so far in the month of June sacked over 30 communities in the state.

He said this while moving a motion on the need for the military to send more troops to the affected areas in the state to quell the rising attacks.