POLITICS NIGERIA reports that the accident involved a 40-feet container.

Five people have been confirmed dead: among those feared dead is a twin brother who sells plastic buckets around the market. One has been seen, but the other is still missing.

Some passengers inside a tricycle were also victims.

Police and men of the state Transport Management Scheme, otherwise known as TIMAS, were seen alongside other people trying to assist the victims.

Meanwhile, the Abia State Governor, Okezie Ikpeazu, has directed the immediate closure of the abattoir/cattle market and Ahia Udele market.

This was contained in a statement by Abia Commissioner for Trade and Investment, John Kalu, on Thursday.

Kalu explained that the closure was as a result of “the sad and shocking incident” of a loaded trailer losing control and falling into the abattoir located at Waterside River area of Ogbor Hill, Aba.

See some photos from the accident scene below: 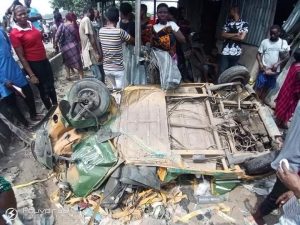 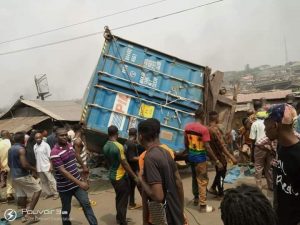 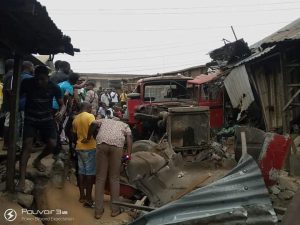