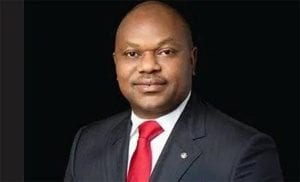 The former speaker of the Delta State’s House of Assembly, Victor Ochei has been appointed as the new head of Maritime Labour and Cabotage Services in the Nigerian Maritime Administration And Safety Agency (NIMASA).

Following the expiration of Dakuku Peterside led board, President Muhammadu Buhari approved the appointment of Mr Ochei as the new Executive Director.

The appointment of Mr Ochei was communicated to journalists on Tuesday by his spokesperson, Nkem Osu.

Before his appointment, he has served as the speaker of the fifth Delta State House of Assembly. He held the position of Primus Interpares of the Delta State Assembly for two years and nine  months before he resigned.

Mr Ochei has B.Sc. in Chemical Engineering from the University of Benin and a Master of Science degree in Corporate Governance from Leeds Metropolitan University in the United Kingdom.

He also has a Law Degree (LL.B) from the Delta State University (DELSU).