One of the Olu of Warri, Ogiame Atuwatse III’s prominent chiefs, Dr Charles Ikomi, is dead.

Chief Ikomi, the Ero of Warri kingdom passed away in Warri, Delta State.

A Facebook post on Thursday by the deceased brother, Eugene Ikomi, Olulaye of the kingdom and Secretary, Warri Council of Chiefs, confirmed the sad news. 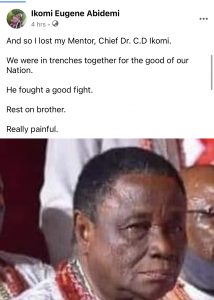 He wrote: “And so I lost my mentor, Chief Dr C.D. Ikomi. We were in the trenches together for the good of our nation. He fought a good fight . Rest on. Really painful.”

Meantime, Chairman of the Warri council of Chiefs and Iyatsere of the kingdom, Chief Johnson Amatserunleghe, expressed shock over the death, describing him as a very strict, disciplined and generous Itsekiri leader.

Before Chief Ikomi’s demise, he was actively involved in the activities of the Warri kingdom.