The Indigenous People of Biafra, IPOB has dragged the Nigerian Government to the African union over the arrest of its leader, Nnamdi Kanu.

POLITICS NIGERIA gathered that the group, through Kanu’s lawyer, Mr. Aloy Ejimakor filed a complaint with the the AU’s ACHPR: African Commission on Human and Peoples Rights, a judicial body tasked with promoting and protecting human rights and collective rights throughout the African continent.

Ejimakor stated that he appealed to the commission to hold the Nigerian government accountable for committing what he described as ‘Extraordinary rendition’.

In a tweet on Thursday evening, The lawyer stated;

“In addition to the various legal, diplomatic & political battles for His Excellency, I’ve today filed a Complaint with the African Union’s ACHPR, asking it to hold Nigeria to its treaty obligations against Extraordinary Rendition.”

“The trial within trial has started.” 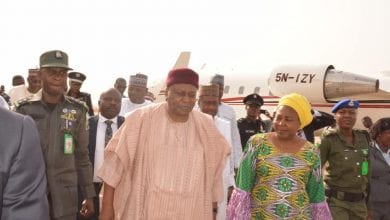 Taraba Governor, Darius Ishaku returns after 3 months away in Abuja