After denying his lawyers access to see Nnamdi Kanu, leader of the outlawed Indigenous People of Biafra (IPOB) in the custody of the Department of State Services (DSS) three times, the Nigerian secret police on Monday finally allowed the visiting team to see Kanu.

POLITICS NIGERIA reports that Aloy Ejimakor, special counsel for Kanu, had last Thursday criticised the refusal by the operatives of the DSS to grant him access to his client.

Before that time, Ejimakor had twice also lamented that the DSS barred Kanu’s lawyers from seeing their client, while the brother of the IPOB leader, Prince Emmanuel Kanu, expressed fear that Kanu’s life might be in danger.

However, in an update on his known Facebook page, Prince Kanu also known as Meme, stated that they have been cleared to see the detained separatist leader at the DSS Headquarters in Abuja. 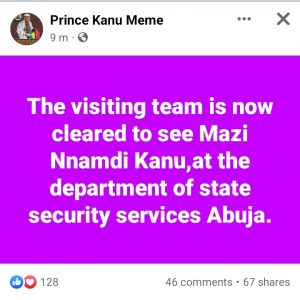 “The visiting team of is now cleared to see Mazi Nnamdi Kanu, at the department of state security services Abuja,” Meme wrote.