The Federal government via its verified Twitter handle, has reacted to the recent Xenophobic attacks on Nigerians residing in South Africa.

President of the Nigeria Union South Africa, Adetola Olubajo, had said that recent attacks began on Sunday morning in Jeppestown area of Johannesburg.

Mr Olubajo said in a statement on Monday that the mob “looted several shops that were around the vicinity suspected to be owned by foreign nationals.”

The Federal government in its reaction stated that the attacks are unacceptable and that President Buhari will meet with the South African president, Cyril Ramaphosa, in October over the rising attacks. 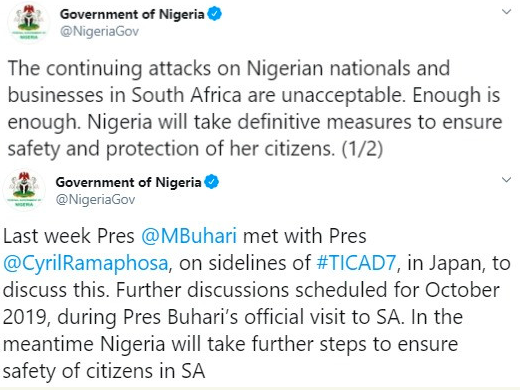