Kanu, who wore a white Fendi designer clothe, was ushered into the courtroom at exactly 10 am by security operatives.

The separatist leader is standing trial over alleged terrorism.

According to his lawyers, he is fully prepared for the court appearance as he was in good spirits. 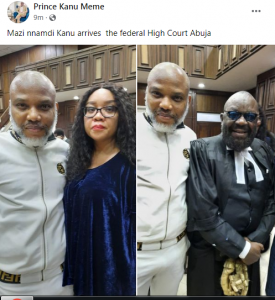 Meanwhile, Aba city in Abia State was on total lockdown in solidarity with Kanu, who would be arraigned at the Federal High Court, Abuja, today (Tuesday).

The streets of Aba were completely empty as residents remained indoors in compliance with the sit-at-home order.

There were no vehicular movements except for a few vehicles that occasionally passed by.

No market or shop was open around the city as residents stayed indoors.

Banks and schools, both private and public, were all shut down.