The legal team defending detained leader of the outlawed Indigenous People of Biafra (IPOB), Nnamdi Kanu, has reportedly filed a suit in Kenya against the government of the Eastern African nation.

Aloy Ejimakor, the Special Counsel to Kanu made this claim via his known Twitter handle on Thursday. 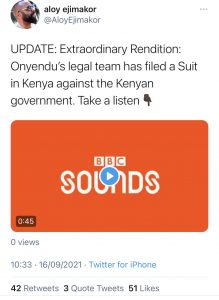 POLITICS NIGERIA recalls that Kanu was seized in Kenya, reportedly by Interpol, in June. Thereafter, he was transferred to Nigerians.

Although the Kenyan High Commissioner Wilfred Machage refuted the claim that Kanu was arrested by Kenyan police, IPOB activists have always lashed out at Kenya for their part in Kanu’s rearrest.

Kanu is expected in court in October. The Nigerian government primarily charge him with treason.