The detained leader of the proscribed Indigenous People of Biafra (IPOB), Nnamdi Kanu, has engaged the services of a popular lawyer, Chukwuma Machukwu Umeh (SAN), to strengthen his defence team.

Kanu is being tried by the Nigerian Government on charges of Terrorism, Treasonable Felony amongst other crimes.

POLITICS NIGERIA reports that the addition of Umeh was disclosed by one of Kanu’s lawyers, Aloy Ejimakor, on Monday evening.

“Just exited from a groundbreaking visitation with Onyendu Mazi Nnamdi Kanu. It was groundbreaking because we covered many new grounds, including the addition of Chukwuma Machukwu Umeh (SAN) to the Legal Team. Onyendu sends his love and felicitation to all his true followers,” Ejimakor wrote on his known social media pages. 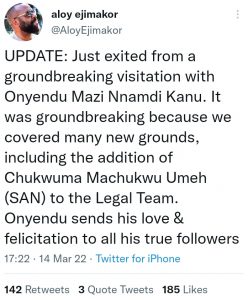 IPOB, founded by Kanu in 2012, is pressing for the secession of the South-East from Nigeria.

Nigerian authorities consider the group as a terrorist organisation.

An attempt by the Igbos to secede as the Republic of Biafra in 1967 triggered a three-year civil war that killed more than 1 million people. The agitation has not stopped.