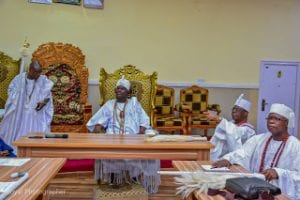 The Ooni of Ife, Adeyeye Ogunwusi, on Monday met with Ekiti State monarchs over the crisis rocking the state’s Traditional Rulers Council.

Mr Ogunwusi action came a day after this newspaper reported that he will visit Ado-Ekiti to have a round table discussion with Governor Kayode Fayemi, Alawe of Ilawe-Ekiti, Adebanjo Alabi and the 11 aggrieved Kings for resolution.

He is to plead with the two aggrieved parties to embrace peace, an agreement that has partially been met.

The council crisis began after Mr Fayemi allegedly supported Mr Alabi to become the chairman of the council in August 2019. But, about 11 kings rejected this, saying Mr Alabi is not qualified to chair the council.

It will also be recalled that the Gov. Fayemi met with the Alaafin of Oyo, Oba Lamidi Adeyemi earlier today after the latter wrote a scathing letter warning the governor to ‘tread softly’ in handling the crisis.

The Alaafin and Fayemi had a fruitful discussion as both were seen laughing and exchanging pleasantries. 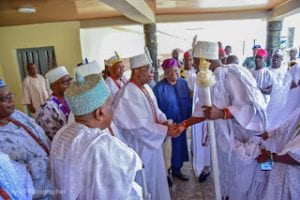