Forty-two ambassadorial nominees have been sent to the Senate by President Muhammadu Buhari for screening and subsequent confirmation.

Senate President Ahmad Lawan made this known in a letter sent to him by the President during plenary on Tuesday.

According to Lawan, the nominees are career diplomats who will oversee Nigeria’s mission outside the country. He added that President Buhari has promised to send the curricular vitae of the nominees as soon as possible.

President of the Senate, Ahmad Ibrahim Lawan read a letter from President Muhammadu Buhari requesting for the confirmation of Career Ambassadors-Designate.

Lawan also read a letter from the President requesting the confirmation of the appointment of forty-two Non-Executive Directors of the Nigerian Deposit Insurance Corporation.

He added that the President also requested the confirmation of the chairman and members of the Nigerian Law Reform Commission.

JUST IN: Saraki meets with Tinubu and Osinbajo in Lagos [PHOTOS] 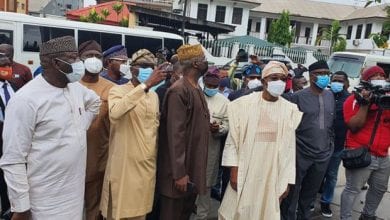