Omoyele Sowore, the #RevolutionNow convener appeared in Abuja Federal High Court today, December 23, since his re-arrest by the DSS. After his re-arrest, Sowore’s lawyer, Mr Marshal Abubakar filled an ex parte application in the court against the continued detention of Sowore.

Abubakar had in the suit marked FHC/ABJ/CS/407/2019, urged the court to order the DSS boss and the AGF to produce Sowore in court “for an unconditional release” from custody based on the order for his release made by Justice Ijeoma Ojukwu on November 6, 2019. 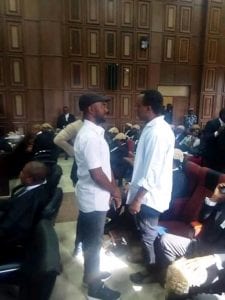 But ruling on the application moved by Abubakar, Justice Ekwo said he needed to hear from the two defendants before taking a decision on the request for the “unconditional release” of Sowore.

Following that the Federal High Court in Abuja then ordered the Director-General of the Department of State Services, Yusuf Bichi, and the Attorney-General of the Federation and Minister of Justice, Abubakar Malami, to explain why the Omoyele Sowore, was still being detained despite the bail granted by the court.

He adjourned till December 23 to enable the two defendants to the suit filed on behalf of Sowore on December 10, 2019 to appear through their lawyers to state their own sides of the story. 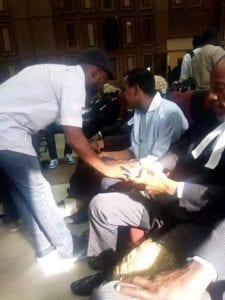 Recall that Sowore was re-arrested violently by the operatives of the DSS at the Federal High Court in Abuja on December 6, barely 24 hours of being released from custody that lasted over four months.

The DSS and the AGF had charged Sowore and his co-defendant, Olawale Bakare, on charges of treasonable felony, before Justice Ojukwu.