As the 2023 election approaches, Shehu Na’Allah Kura, Kano State Commissioner for Finance and Economic Development, has left the ruling All Progressives Congress (APC).

Although Kura is yet to publicly announce his defection from the APC to the New Nigeria Peoples Party (NNPP), the Kano State commissioner for Information, Muhammadu Garba, confirmed his exit from the party via a press statement obtained by POLITICS NIGERIA. 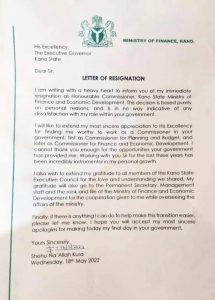 “One of the commissioners nominated for appointment by Senator Ibrahim Shekarau into the administration of Governor Abdullahi Umar Ganduje in the lucrative ministry of finance and economic development, Shehu Na’Allah Kura has resigned and joined his boss,” the statement read.

A former lawmaker, Abdulmumin Jibrin, also recently dumped the APC for the NNPP.

Kwankwaso is expected to be the presidential flagbearer of the NNPP in the 2023 general elections.