The Nigerian troops of Operation Hadin Kai (OPHK) have arrested a high profile Boko Haram member on wanted list in recent raid operations on the terrorists hideouts in parts of the North East.

The Director, Army Public Relations, Brigadier-General Onyema Nwachukwu, disclosed this in a statement on Thursday in Abuja.

Nwachukwu said the troops of Sector 2, OPHK, arrested the wanted terrorist, Yawi Modu, and his cohorts along Damboa-Wajiroko road.

He also disclosed that the troops raided the terrorists’ Improvised Explosive Devices (IEDs) materials hub in Damboa and Gashua Local Government Areas of Borno and Yobe States, respectively, during their operations.

“These ISWAP criminals facing the reality of obvious depletion are desperately acquiring IED materials to make explosive devices with which to unleash terror on innocent civilians, in a bid to remain relevant and present a posture of potency.

“In the sting operation conducted, a total of 281 (50Kg) bags of Urea were recovered from the warehouses in the market and two notorious distributors were also arrested.

“Recall that Urea fertiliser has been banned by Government because of its use as a major component for manufacturing IED by terrorists.

“The suspects and materials recovered are currently undergoing preliminary investigation,” he said.

See the photos released by the Nigerian army below: 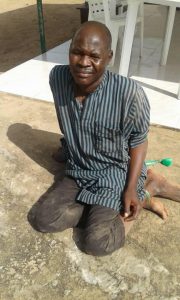