Bashir Ahmad, Personal Assistant on New Media to President Muhammadu Buhari says the efforts of his principal will be more appreciated when he leaves office in 2023.

POLITICS NIGERIA reports that Ahmad said this on Monday while commenting on the present administration’s ‘reform plans’.

The 30-year-old commended Buhari for “setting the country on the right track”, adding that the present administration’s works will eventually ‘pay off”. 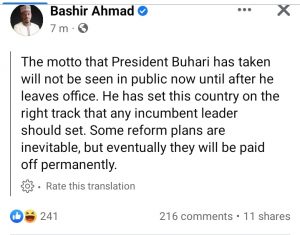 “The motto that President Buhari has taken will not be seen in public now until after he leaves office. He has set this country on the right track that any incumbent leader should set. Some reform plans are inevitable, but eventually, they will pay off permanently,” Ahmad wrote on his verified Facebook page.

Buhari will round off his second term in office next year and is not constitutionally eligible to contest again.