The Acting Chairman of the Economic and Financial Crimes Commission, EFCC, Ibrahim Magu, on Tuesday October 15, 2019 called on all heads of anti-corruption agencies in Africa to join hands in confronting and defeating corruption through collective action.

Magu, who stated this at the Economic Community of West African States (ECOWAS), Secretariat in Abuja, while delivering a goodwill message at a two-day workshop on “Capitalisation and Sharing of Good Practices on Promoting Regular Migration and Fighting Border Corruption,” organised by the High Authority against Corruption and Assimilated Offences (HALCIA), of Niger Republic, lauded the efforts of the heads of anti-corruption agencies in Benin Republic, Burkina Faso and Mali. He commended their spirit of collaboration and comradeship in intelligence sharing, cross-fertilisation of ideas and learning in the fight against corruption.

“This workshop has provided a platform not only for our respective countries to collaborate and share ideas, but also for Africa as a continent to unite in its resolve to fight corruption to a standstill. Therefore I call on every one present, to be part of this alliance and partnership in the interest of Africa,” Magu stated.

Decrying the negative effects of corruption on Africa and its people, he noted that the scourge takes the blame for poor infrastructural development of African societies, and other deficiencies such as lack of portable water, unemployment, banditry, youth restiveness, kidnapping, human trafficking and other forms of criminalities.

According to Magu, despite the vast natural resources that abound within the continent, corruption has made poverty and inequality pervasive and has driven citizens of African nations to desperation.

In his opening remarks, the President of HALCIA, Abdourmane Gousmane, thanked the EFCC boss for accepting to co-chair the workshop, stating that anti-corruption agencies in Nigeria, Niger, Burkina Faso, Benin and Mali “must continue to intensify actions to reinforce the place of anti-corruption institutions within the institutional structure of our countries.”

He expressed regret at the high level of corruption at national borders of African countries, which he said is responsible for drug trafficking, circulation of illegal arms, smuggling of precious stones and human trafficking.

The workshop which aims at experience sharing on irregular migration and border corruption, proposed advocacy strategies against the scourges in the five nations of Nigeria, Niger, Burkina Faso, Benin and Mali. 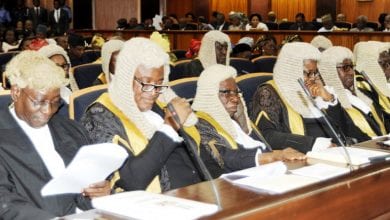