The post was massively shared following a row between the federal government and the management of Twitter. it will be recalled that the Nigerian government through its minister of information, Lai Mohammed suspended the activities of Twitter in the country after the social media giant deleted a tweet from President Muhammadu Buhari’s handle.

In the viral screenshot, Twitter allegedly wrote that “Dear @MBuhari We have no idea of who you are or what country you are leading, we have come across a tweet that violates our rule no 4 of “safety and freedom” and removed it.” 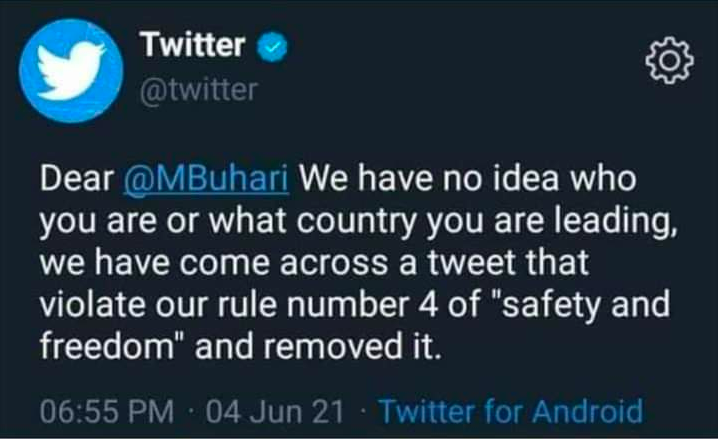 But is this true?

To verify this claim, POLITICS NIGERIA ran a quick fact check by analysing Twitter’s official handle (@Twitter) and we discovered that the last tweet on the timeline was posted on May 28th and it has nothing to do with the controversy rocking Nigeria. 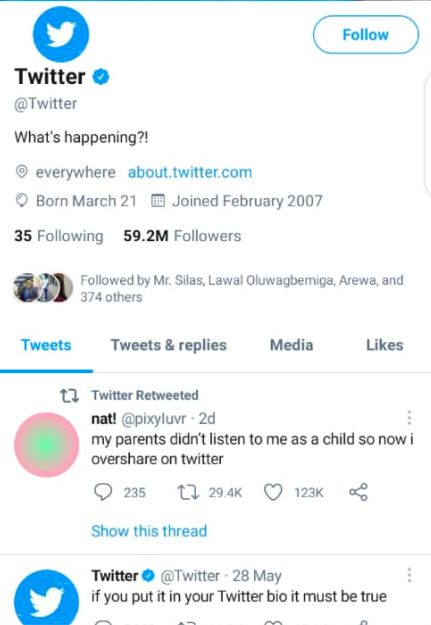 Our correspondent also did a quick google reverse of the fast spreading tweet and we discovered that it was photoshopped.  This newspaper reported how Mr Buhari’s tweet referencing the country’s civil war, and threatening to treat those attacking government buildings “with the language they understand” triggered controversy online.

Social media users saw the tweet as a veiled threat against the Igbo ethnic group who suffered casualties during the war and called on Twitter to suspend Mr Buhari’s account. Two days after, Twitter yielded and it deleted the president’s controversial post.

The federal government expressed shock and said the platform chose to ignore the inciting messages from the proscribed IPOB but was quick to enforce its rules on the president.

As of Friday evening, Twitter said it was investigating the suspension. On Saturday, the platform issued it’s first official statement, via its Public Policy handle, saying it is concerned about the blockade, promising to restore access to Nigerian users. 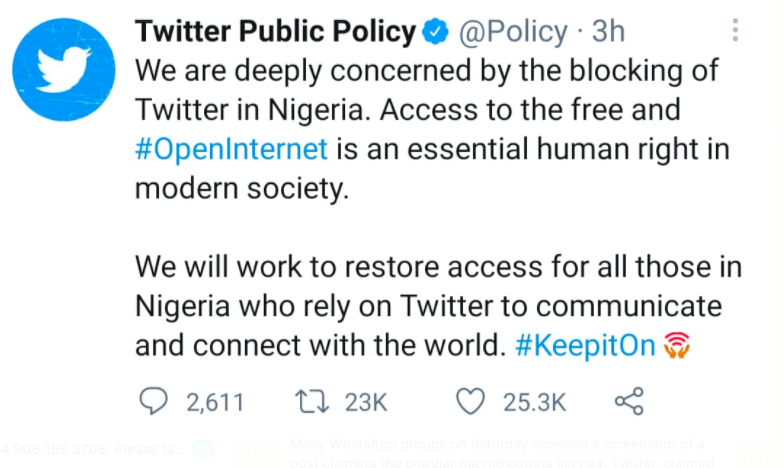 “We are deeply concerned by the blocking of Twitter in Nigeria. Access to the free and #OpenInternet is an essential human right in modern society,” the organisation said.

“We will work to restore access for all those in Nigeria who rely on Twitter to communicate and connect with the world. #KeepitOn.”

Except the above reaction, Twitter never claimed it doesn’t recognise Mr. Buhari as the leader of Africa’s most populous nation, hence the trending screenshot is FALSE!