Following the sporadic shooting at protesters on Tuesday night, videos and captions posted on social media platforms insinuate that Asiwaju Bola Ahmed Tinubu may have jetted out of the country to France. The former Lagos state Governor and the National leader of the All Progressives Congress (APC) is accused of complicity in the shootings on #EndSARS protesters, which claimed scores of lives.

According to data from Amnesty International, a global human rights group, not less than 38 persons were killed on Tuesday. Meanwhile, hours after the incident, there are multiple social media reports and news articles suggesting that Mr Tinubu had travelled out of the country to avoid embarrassment and invasion of angry protesters.

These various reports referenced three videos, which POLITICS NIGERIA, in its support for accuracy and accountability in the media, has conducted verification on.

How the protest began…

Many Nigerians have on several occasions shared their unpalatable experiences in the hands of the Special Anti-Robbery Squad (SARS) of the Nigerian Police but things got heated up a fortnight ago.The operatives of the police unit, established in 1984 to combat a rise in armed robbery, have been found culpable in cases of extortion, bribery, harassment, extrajudicial killings in the recent months.

The recent case that generated the furore was that of a man, a suspect arrested by the police in Ughelli, Delta State, who allegedly fell off from a moving police vehicle and allegedly died afterwards. Although the report of the death was later dispelled by the state minister of labour and employment, Festus Keyamo, it did not pacify the people.

This sparked agitations on social media and led to street protests in the oil-rich state. The social media campaign calling for the disbandment of the SARS became fully blown days after. It started with protest walks to Alausa, where the Lagos State Government House is located. Protesters besieged its premises on October 8.

The protesters led by celebrities including the popular Instagram comedian, Debo Adebayo (Mr Macaroni) and singer, Paul Okoye, passed the night in front of the Lagos government house. From Lagos, the protest became a marathon exercise that spilled to Ibadan, Osogbo, Portharcourt, Ilorin and other major cities in the country.

In reaction to the demands of the protesters, Inspector General of Police, Mohammad Adamu, announced the dissolution of SARS and move by the government to reform the police. A day after he disclosed the establishment of a new Special Weapons and Tactics (SWAT) team to replace the disbanded SARS.

This development however did not placate the protesters who rejected all attempts to recycle operatives of the disbanded SARS unit. They demanded an urgent prosecution of all killer-cops and a complete overhaul of the Nigerian Police.

As events unfolded, the protesters began to raise questions of accountability, questioning the salary structures of lawmakers in comparison with that of civil servants.

Stakeholders including Mr Tinubu called for calm on Tuesday, begging protesters to stop the agitations. At this time, hoodlums posing as #EndSARS protesters had seized an opportunity to break into the Nigerian Correctional Service (NCS) facilities in Benin, resulting in the escape of several inmates.

There are reports of thugs burning down police stations across the country and perpetrating other heinous crimes in guise of being protesters.These pockets of violence resulted in the declaration of curfew by the Governments of Edo, Lagos, Osun amongst others.

Meanwhile, on Tuesday evening, soldiers stormed the Lekki Toll gate and opened fire on the protesters. Graphic evidence showed that the shooters were men of the Nigerian Army. Prior to this incident, the CCTV cameras positioned at the Toll Gate were removed and the lights put out by its operators.

Although the Lagos State Government and the Nigerian Army have denied their involvement in the massacre of Tuesday, evidence obtained by POLITICS NIGERIA have proved contrary. In retaliation, angry mobs have started destroying properties linked to the Governor, Sanwoolu and Tinubu.

POLITICS NIGERIA had earlier reported how Television Continental and The Nation newspaper offices in Lagos were burnt on Wednesday.

In a video posted on Twitter at exactly 6:17pm on Wednesday, a user @Xpsilver1 wrote “Nigerians in France just surrounded the hotel TINUBU (Thiefnibu) lodged. They’re demanding for his release to them.
#EndSARS Now this is what I talked about. Thank y’all for listening and retweeting.”

The user attached a 27 seconds video of a dark-skinned man attempting to hide from an angry mob shouting ” Ole Ole…” which means thief in the Yoruba parlance.

A video posted by another user, TheLastLazyMan, at exactly 11:35pm on Wednesday was captioned “No peace for the wicked! Tinubu caught in France (Video)”.

The video seen by over ten thousand persons has been shared 336 times.

No peace for the wicked!
Tinubu caught in France (Video)
Pls Retweet
#EndSars

The third of the viral video clip, posted by another twitter user, Bola_Chi, has been streamed 245 times and shared ten times.

She captioned the video; “See baba Tinubu, the wicked we not know peace. He was sent back from france.”

See baba Tinubu, the wicked we not know peace. He was sent back from france pic.twitter.com/qzWvaHPeEj

It should be noted that the three video footages have been circulated on WhatsApp and other social media websites.

Checks by POLITICS NIGERIA showed that the first video was not shot in France. The plate number code is that of the United Kingdom.

Also, while we could not ascertain who the person the people booed is, the picture of the man did not show Tinubu or his resemblance.

Findings also revealed that the second clip was shot in the Nigerian Embassy in Dublin, the Capital of the Republic of Ireland, not in France.

The video was first posted on the internet at exactly 8:26 pm by Seun Badejo, a Nigerian living in Ireland.

According to Mr Badejo, they were in front of the Nigerian embassy in Dublin, in solidarity with the protesters in Nigeria, calling for the ambassador to address the citizens.

More so, Google reverse image searches conducted showed that the place was the Embassy in Dublin and not France as being rumoured. Popular Nigerians including Deji Adeyanju, who had circulated the videos initially, have however deleted it after Mr Badejo debunked posts linking the events in the Video to Tinubu.

In the third clip, the person allegedly running at the airport, was Obasanjo and the video is dated as far back as 2019.

OBASANJO ON THE RUN?
Where could he be running to? Is there something they are not telling us.

When POLITICS NIGERIA contacted Tunde Rahman, the spokesperson of the former Governor, he denied reports of his principal travelling abroad.

“Asiwaju is in Nigeria. In fact, he has not travelled since the COVID-19 pandemic broke out,” he said.

VERDICT: Since the videos have not proven that Mr Tinubu has travelled to France coupled with a statement from his spokesman, the CLAIM is FALSE. 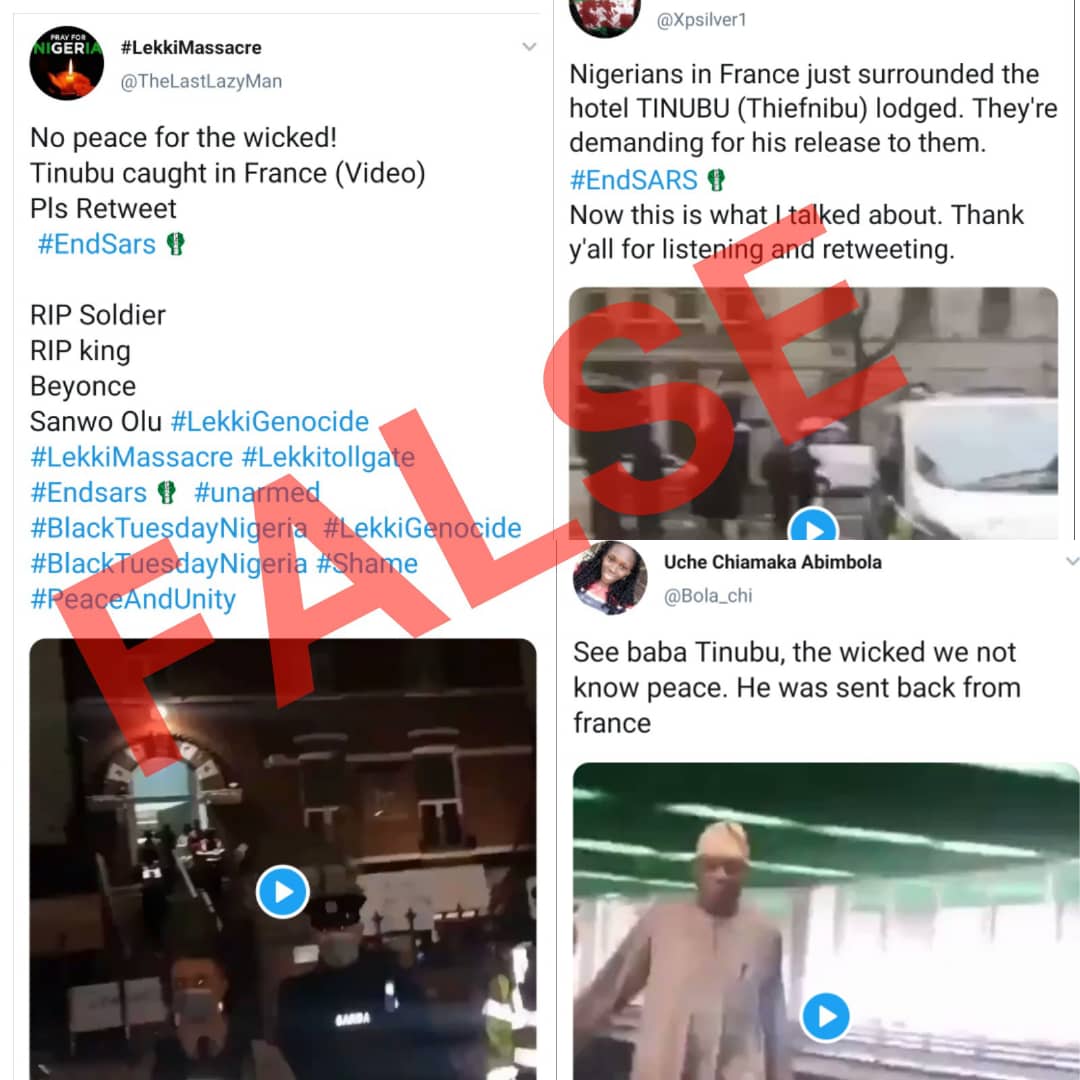