In the wake of terror group, the Taliban’s takeover of Afghanistan, rumours of the same happening in Nigeria due to incessant attacks from Boko Haram and Bandits are being peddled on Social Media.

Amidst all this, a picture, now viral, surfaced online on Monday night alleging that the Taliban’s flag was hoisted in an office belonging to the National Emergency Management Agency (NEMA), in solidarity with the Islamist group.

In it’s pursuit of accountability and Truth, POLITICS NIGERIA decided to investigate the authenticity of the Image and furnish the public with its findings.

CLAIM: On August 15th, precisely around 9:53PM, an image of three flags; the Nigerian Flag, the official flag of NEMA and a flag with Arabic inscriptions, was posted online by a Twitter User, @olufemiSP, with the following caption;

“Nigeria has a terror-loving Pantami as minister, pampers Boko Haram terrorists, and pays murderous herdsmen. As if that’s not enough, look at the office of NEMA DG!”

“Taliban would be proud.” 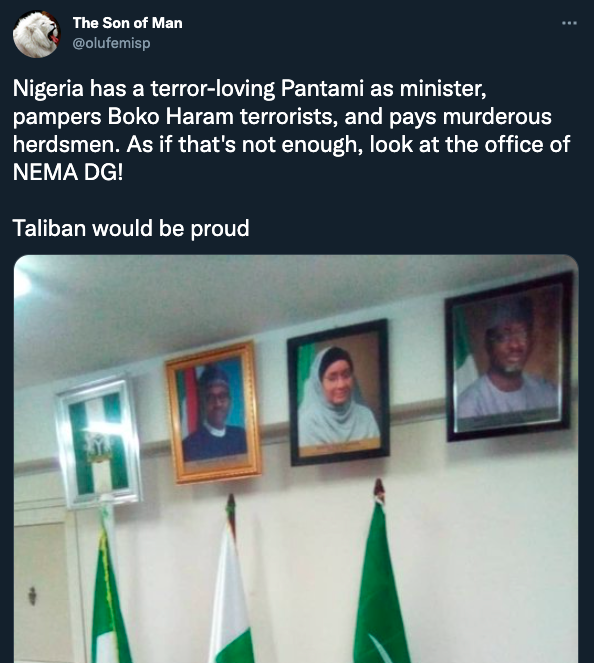 This image subsequently went viral with many assuming the third flag belonged to the Taliban.

Several social media users lampooned the agency and the Federal Government, alleging that it was encouraging ‘terrorism’.

VERIFICATION: Further checks carried out by this Newspaper reveal that the flag with Arabic inscriptions is not that of the Taliban but the Saudi Arabian Flag.

Also an official statement from the Agency through its spokesman, Manzo Ezekiel, revealed that the flag was hoisted because of a bilateral meeting with representatives of the Saudi Arabian Government.

Ezekiel said; “I want to tell you that last week Friday, we had a meeting in our office, which was a bilateral engagement with representatives of the government of Saudi Arabia.”

“In that programme, there was a flag of Saudia Arabia, which was placed behind the representative of the Saudi Arabian government in which they came to commission a grant facility that was given to NEMA for the upgrading of the emergency call centre, where Nigerians that are in distress could call and receive necessary referral or support.”

“So whatever flag you’re talking about, if it is the flag of the government of Saudi Arabia, it is the flag of a country, not a flag of any religious organisation or sectionalists. In fact, the flag was used for only few minutes during the occasion and was removed immediately.”

VERDICT: The claim that a Taliban Flag was hoisted in a NEMA office is FALSE