Aloy Ejimakor, counsel to Nnamdi Kanu, leader of the proscribed Indigenous People of Biafra (IPOB), says “it is unnatural to negotiate with a man in chains”.

Ejimakor, who is among the lawyers defending Kanu against the Nigerian federal government, advised the nation’s authorities to ‘stop resisting every effort being made to release his client from detention’. 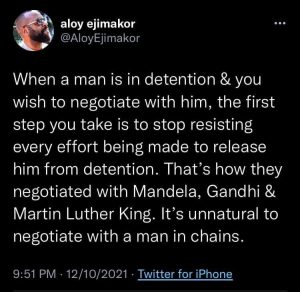 “When a man is in detention and you wish to negotiate with him, the first step you take is stop resisting every effort being made to release him from detention. That’s how they negotiated with Mandela, Gandhi and Martin Luther King. It’s unnatural to negotiate with a man in chains,” Ejimakor wrote on his known Facebook and Twitter pages on Tuesday night.

POLITICS NIGERIA reports that Kanu has been in the Department of State Services (DSS) custody since his arrest and extradition to Nigeria. He is on trial for treasonable felony.

His trial is slated for October 21 at the the Federal High Court of Nigeria. Kanu’s controversial IPOB organization has been advocating for the secession of southeastern Nigeria.

Former Biafra, a deprived region in the southeast mainly populated by the Igbo community, was the scene of a bloody civil war between 1967 and 1970.

After the death of more than a million people, notably from famine, and the failure of the rebellion, the “Republic of Biafra” was finally reintegrated into Nigeria, a country of nearly 200 million inhabitants regularly shaken by intercommunal tensions.