Princewill Chimezie Richards, leader of the Biafra Nations League (BNL) on Thursday asked the administration of President Muhammadu Buhari to bring suspended Deputy Commissioner of Police, Abba Kyari, out from prison and hand him to the United States.

POLITICS NIGERIA reports that according to the Biafra separatist leader, Kyari is already “feeling at home” at the Suleja correctional centre in Abuja where he is currently being held. 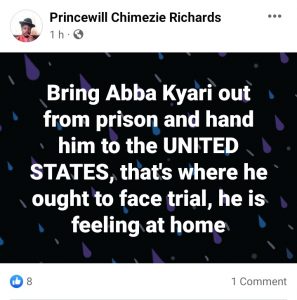 “Bring Abba Kyari out from prison and hand him to the United States. That’s where he ought to face trial, he is feeling at home,” Richards wrote on his known Facebook page.

Kyari was formerly in the custody of the National Drug Law Enforcement Agency (NDLEA) following his arrest by authorities on February 12.

In a charge marked FHC/ABJ/57/2022, the agency accused Kyari and other defendants of conspiracy, obstruction and dealing in cocaine worth 17.55 kilograms.

Upon arraignment, Kyari and four other defendants pleaded not guilty.

Apart from drug trafficking allegation, Kyari is also being accused of being complicit in the $1.1 million money laundering scheme spearheaded by Ramon Abbas, also known as Hushpuppi. For this, the Federal Bureau of Investigation (FBI) is requesting his extradition.