Records have shown that Special Assistant to President Muhammadu Buhari on Media and Publicity, Femi Adesina, in 2008, condemned Ibrahim Gambari for his support of dictatorial governments.

Mr Gambari, who was recently appointed as the new Chief of Staff to President Buhari, has come under criticism for his role in bolstering the gag on press freedom. The diplomat served as the Minister for External Affairs between 1984 and 1985 under Mr Buhari who was a military head of state then.

Also, Mr Gambari worked for the late dictator, General Sani Abacha, whose regime saw to the victimisation of journalists and activists. One of the victims of the stifling of press freedom under Abacha was Ken Saro-Wiwa, a Nigerian journalist and environmental activist, who led a nonviolent campaign against environmental degradation of the land and waters of Ogoniland by the operations of the multinational petroleum industries.

Mr Saro-Wiwa was hanged in 1995 by the military dictatorship of General Sani Abacha. However, years after the killing, Mr Gambari defended the actions of late Abacha saying the killing was in the interest of the state.

Nevertheless, in a column published on July 12, 2008, Mr Adesina lampooned Mr Gambari. The article published on page 15 of Saturday Sun was titled “Gambari: the slap next time.”

In one of the paragraphs, Mr Adesina referred to the new Chief of Staff as a man who enslaved himself to please his paymasters.

“Gambari enslaved himself to please his paymasters. Now, 13 years later, the shackles are still tied round his neck. bootlicking grovellers fail to learn.”

Reacting to this, former Presidential spokesperson, Reno Omokri, shared a snippet of the column and criticised Mr Adesina who is now serving in the same administration with Mr Gambari.

Mr Omokri, who wrote on Saturday, said; “Femi is the one BOOTLICKING the Gambari he called a BOOTLICKER!”

“Gambari enslaved himself to please his paymasters. Now, 13 years later, the shackles are still tied round his neck. BOOTLICKING GROVELLERS fail to learn.”-@FemAdesina on Ibrahim Gambari July 12, 2008.

Today, Femi is the one BOOTLICKING the Gambari he called a BOOTLICKER! pic.twitter.com/1a9H2mhmcr

It should be noted that ever since the appointment of Mr Gambari, Mr Adesina has not congratulated the new Chief of Staff in the public. 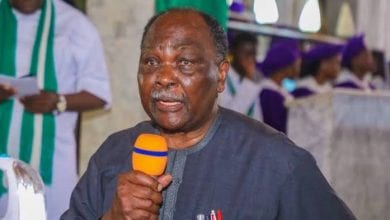 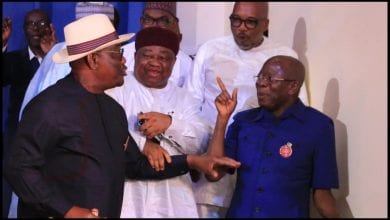