The Special Adviser to the Lagos State Government on Environmental Cleansing and Protection, Joe Igbokwe, on Wednesday denied reports that he was attacked by a group of angry youths in Lagos recently.

POLITICS NIGERIA reports that some blog posts claimed that Igbokwe, a member of the ruling All Progressives Congress (APC) was physically assaulted by some youths in Lagos and his vehicle burnt.

Igbokwe took to his social media page to disclose that such never happened, saying “it is a lie from the pit of hell”. 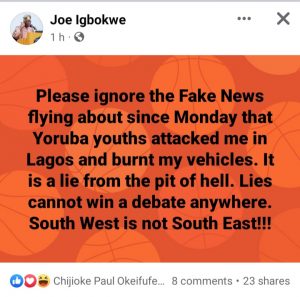 “Please ignore the Fake News flying about since Monday that Yoruba youths attacked me in Lagos and burnt my vehicles. It is a lie from the pit of hell. Lies cannot win a debate anywhere. South West is not South East!!!” he wrote on his known Facebook account.

It is not the first time such claim would be made against Igbokwe. In May 2021, it was also alleged that some angry Igbo youths went after him, asking him to leave Lagos for his ancestral hometown in Nnewi, Anambra State. It also turned out to be a false report.