Joe Igbokwe, a chieftain of the All Professional Congress (APC) in Lagos State has asked the Federal Government of Nigeria to immediately declare a State of Emergency in Nigeria’s South East region.

Igbokwe was reacting to Tuesday’s brutal killing of Chike Akunyili, husband of late Prof. Dora Akunyili, the former director-general of the National Agency for Food and Drug Administration and Control.

He criticised South East leaders for turning blind eye to the ugly situation going on in the region. 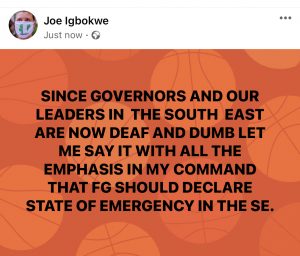 “SINCE GOVERNORS AND OUR LEADERS IN THE SOUTH EAST ARE NOW DEAF AND DUMB LET ME SAY IT WITH ALL THE EMPHASIS IN MY COMMAND THAT FG SHOULD DECLARE STATE OF EMERGENCY IN THE SE,” Igbokwe wrote on his known Facebook page on Wednesday.

Many people are linking Mr Akunyili’s murder to the outlawed Indigenous People of Biafra (IPOB) militants, and its armed wing, the Eastern Security Network (ESN). The controversial pro-Biafra group has been accused of perpetrating so many abominable acts in the Southeast region recently.