A chieftain of the All Progressives Congress (APC), Joe Igbokwe, on Wednesday hailed the decision of the Governor of Anambra State, Prof. Charles Soludo, to set up a committee to make peace with the outlawed Indigenous People of Biafra (IPOB).

POLITICS NIGERIA reports that Soludo appointed a 15-member Truth, Justice and Peace Commission, to stop the activities of IPOB.

Reacting to the development, Igbokwe, who has been critical of IPOB’s activities, wrote on his known Facebook page: “This is a great move. Gov soludo should be supported by every igbo man that has igbo blood flowing in him.” 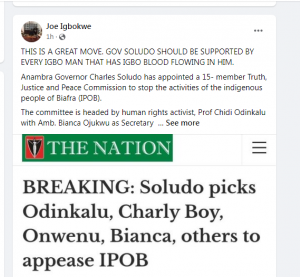 Violence has flared in Anambra and other southeastern states since 2021, killing at least 150 police or members of the security services, according to the police. About 26 police stations and election commission offices have been attacked, local media have reported.

IPOB, an outlawed movement seeking independence for ethnic Igbo of the region, and its armed wing Eastern Security Network (ESN) have been blamed for the violence, but IPOB has denied the charges.